Skip to content
You are here:
Surf North & South Male Atolls in the Maldives
Story by ClearWater 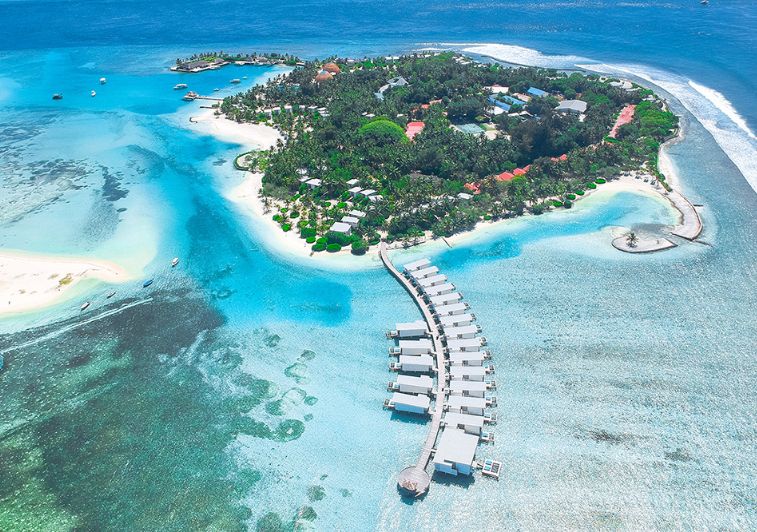 In this Blog item, Surfbreaks North & South Male, we explain a bit more about the surfspots in the Atolls of the Maldives. The most common choice for surfing in the Maldives is the North and South Male Atolls. The access from the nearby airport and the amount of surf spots make the north and south male atolls the perfect choice. Because the possibilities for surfing are relatively close to each other, the costs of a surf trip are also better. Most boats also sail in the vicinity of the North and South male atolls because there are plenty of possible surf spots to be found. The downside of the advantages is of course that there is a chance that in the surfing season it is busier than for example the central atolls of the Maldives.

The most important surf spots in the Northern Male Atolls are briefly described below and give an indication of the characteristics of the waves.

Jails: long, fast right-handers that are perfectly sheltered from SW/W winds. Best waves in the spring to summer and wave size between 2 and 8 feet. Larger waves can be expected in June to August. Jails is located at Himmafushi, 15 min. from Male.

Honky’s: lefthander breaking of Thamburudhoo island, reforms on the inside and gets 2 foot bigger Sultans which is on the same reef but app 100 meters south: most surfed wave in The Maldives, good righthander, mellow outside and barrels on the inside, off shore in SW/W winds. Best conditions from march till October and with low tides the break performers the best. The wave is at his best from head high to overhead.

Pasta Point: One of the most consistent breaks on the North atolls with all sizes performing good. Even the smaller waves from 2 feet work well at Pasta point. This left hander breaking off resort island Dhonveli, off limit for Surf Boats. Winds from south, south west work the best for pasta point and the between May and august you likely find the best waves.

Ninja`s: This wave is perfect for longboarding and for beginners. Because it’s a mellow right hander and often uncrowded is a popular wave. Keep in mind that it’s very shallow on the inside. When it gets above shoulder-high it’ll close out but 4 feet and under this wave will provide you with fun!

Lohi`s: left hander that breaks of resort Hudhuranfushi which was used to call Lohifushi. This break is exclusively for resort guests with a surf pass. The wave is long and perfect, max 40 surfers on the island, perfect option when all other breaks are crowded. The conditions are at it best with head-high to double overhead and from May to October.

Coke`s: One of the best big waves breaks in the Maldives. A heavy right hander that breaks off local island Thulusdhoo and when this machine is on it provides a lot of barrels. It’s ideal during a straight south swell with northwest winds and head high to double overhead waves.

Chickens: One of the longest lefthander on the other side of the channel from Coke`s. This fast wave could provide you with ten second barrels.  Excellent wave, lot of water on the inside and at its best on a day with no wind.

It´s good to go here when North Male is too massive to surf or crowded. The waves are around 2 foot smaller but it’s still a very nice atoll and great for snorkeling. These are the surf breaks:

Two ways: in front of Gulhi, it’s called two ways because it has a left and right hander break! The lefthander is easy and a bit slower so good for the beginner to intermediate of the surfer who wants to work on improving skills. The righthander can get a bit bigger but needs a stronger swell. Best condition with south swell and North winds.

Quarters: in front of the worker island of Anantara, mellow right hander, ideal for less advanced surfers, inside is hollow and shallow. Without a decent swell this spot won’t work. 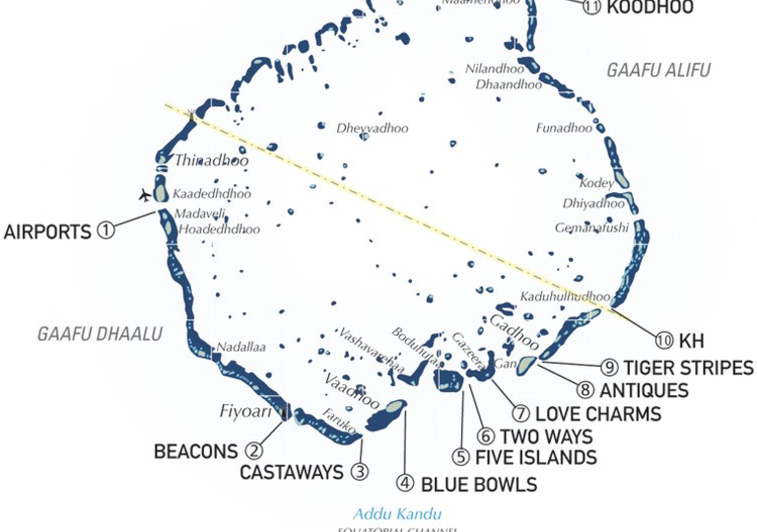 Kandooma right: This spot speaks for itself, one of the better waves with a real surf resort. Off limits to boats but very good right hander with small take off point.

Rip Tides: Super-fast but workable right hander close to Guraidhoo local island, good wave! The current is strong so don’t be surprised by that. The wave is best during a south swell with southwest or west winds.

Looking for a resort where you can enjoy your stay in luxury? Here you will find a selection of our favorite resorts ideal for surfers traveling with their family or girlfriend. These resorts all have amazing waves right out front or at a short boat ride away. Check out the resorts in the Maldives or Indonesia and book for top rates!

Looking to book a surf boat charter in the Maldives, Mentawai or Banyak? Wake up to uncrowded glassy perfection, jump straight into the line-up and surf more waves in a week than you will in 6 months at home! Check out our luxury and budget charters and enjoy your surf trip of a life time. Book now at the best rates!

We have compiled a number of Villas around Bali and other islands in Indonesia that will allow you to explore and getaway to other hidden Indonesian treasures. Have a look at our collection of 1 to 5+ bedroom villas, all with great surf available and providing the best Balinese experience we could find!

FIND A VILLA
Go to Top